Coal mine will blast peace for thousands near game park 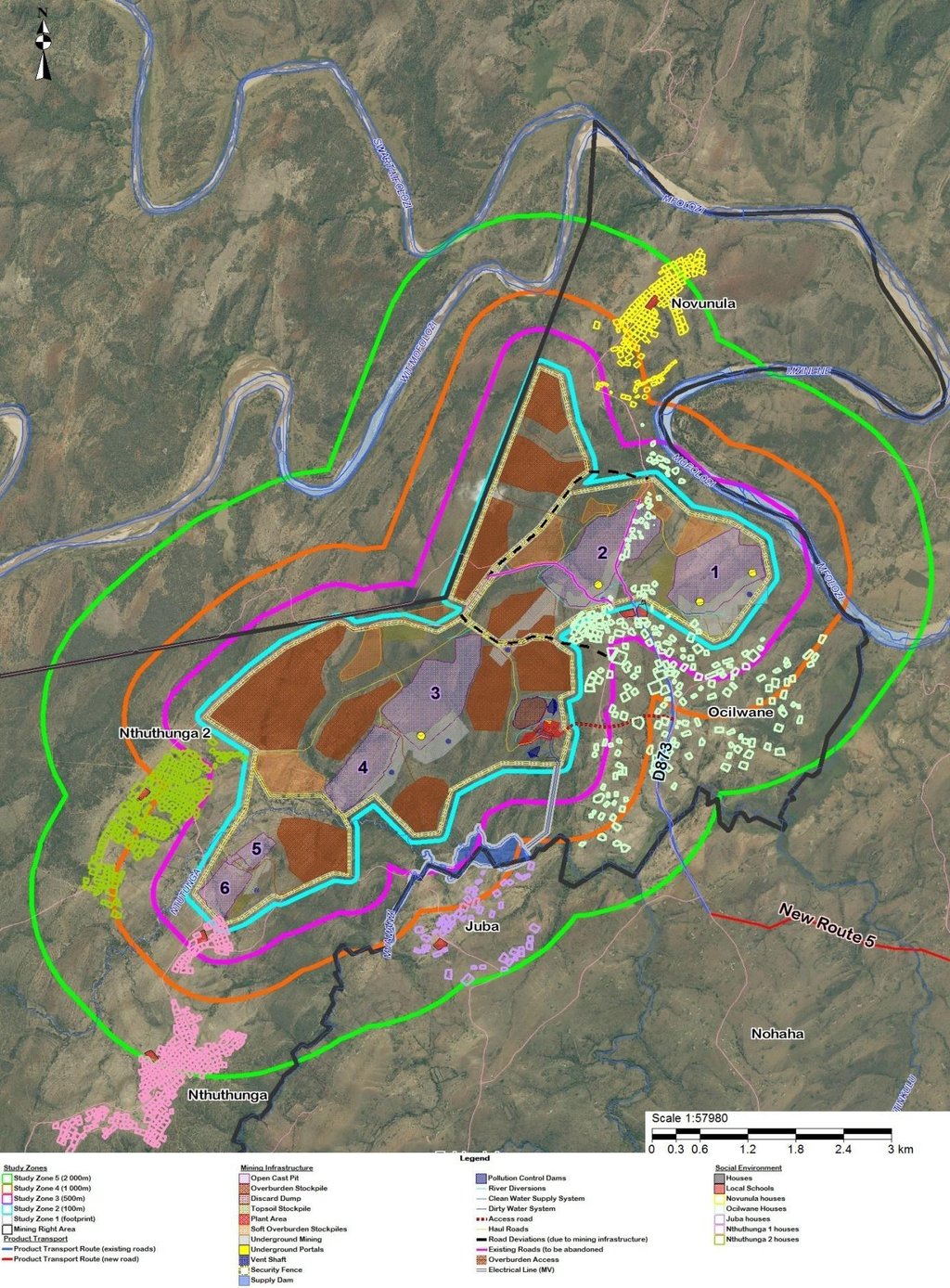 By Tony Carnie
Life will never be quite the same for several thousand people next to Africa’s oldest game reserve and wilderness area if a massive new coal mine is blasted open underneath or next to their homes.

A new environmental scoping report on the controversial Ibutho coal mining venture on the southern borderline of the Hluhluwe-Imfolozi game reserve does not say exactly how many people will have to be moved from their homes.

But by examining maps of the proposed mine, existing village settlements and other data, it seems likely that several hundred people may have to abandon their houses, businesses, farming plots and/or ancestral graveyards if the project goes ahead.

The daily lives of more than 7 000 other people are also set to change dramatically as they find themselves living virtually on the doorstep of gigantic mining pits filled with the dust, noise and floodlights of a busy coal-mining operation.

The direct impacts will be there 24 hours a day, seven days a week for the next 32 years, according to a final environmental scoping report published this month

Apart from the blasting operations used to shatter and loosen anthracite coal from the bedrock, the report by the Jacana environmental consultancy suggests that noise from up to 200 coal trucks a day will radiate out to distances of around 1.5km during the day and about 3.5km at night.

These noise impacts are also set to shatter the tranquillity of the Imfolozi wilderness area, a specially protected 32 000 hectare zone of wilderness the late wildlife conservationist Ian Player helped establish to ensure that South Africa preserved some ancient wild spaces.
The mine is located just 100m from the wilderness boundary, with statistics from Ezemvelo KZN Wildlife showing that less than 1% of the country’s surface is protected as wilderness areas.

The Jacana report acknowledges that drilling and blasting could be a “significant” source of noise pollution within a radius of 3.5km but suggests some of these impacts could be reduced through modern blasting techniques.

The resulting air blasts could rattle windows and large roofs of nearby homes, while there was also a risk of flying rocks being tossed into the air and hitting various structures such as schools and community meeting places within 500m of the coal pit boundaries. Some residents told consultants they were worried that blasting could crack their homes.

The report is silent on exact numbers of who would have to move out, but by examining maps of the proposed mining fence line and the current layout of four neighbouring communities, it appears that the villagers of Ocilwane will be hardest hit as scores of homes there lie in the mining path.

Ocilwane has about 230 households, which could translate into about 1 900 people in total.

The village also has two schools, a clinic, some small-scale businesses, several worship sites, grazing land for cattle and crop fields next to the Mfolozi River.

Nearby, there are another 1 640 people in the Nthuthunga 1 village, some of whom could also be affected. This village also has two schools, a number of Shembe worship sites, small businesses, three community graveyards, a water storage dam, livestock grazing land and crop fields.

Ntuthunga 2 settlement has about 1 503 residents, a primary school, two community graveyards and vegetable gardens next to the river.

Another potentially affected community is Novunala, with 1 245 residents, one school, several small businesses, a community graveyard and livestock grazing land.

On the issue of relocation, the report says this should be avoided if possible, but if people have to be moved, they should be resettled in areas with fertile soil for growing crops.
The report shows there could be indirect impacts much further afield as the mine will require up to 2 190 megawatt hours of electricity a month and 105 million litres of water a month.

The report says the neighbouring Mfolozi River is already considered a water-stressed river and it is unlikely that the Department of Water Affairs would grant a water abstraction permit from this river.

Surface and groundwater in the vicinity of the mine could also be poisoned from acidic mine drainage and other contaminants from mining. One of the biggest risks is sulphuric acid, which is created when sulphides in the coal rock are exposed to oxygen and water from the mining process.

Underground mining could also cause the ground to subside.

“Very little can be done to combat subsidence in the mining environment. It is therefore evident that both underground and opencast mining could severely impact the hydropedelogical (water and soil) functioning of the area and therefore the quality and volume of water that flows towards the catchments towards the east.”

On the future use of the land when mining ceases in 32 years, the report says: “It is doubtful that the areas will ever function in the same manner as is presently the case from a hydropedological perspective.” This is because old mine pits, even after being filled in, would absorb more water run-off.

“Mining and rehabilitation will lead to a decrease in surface run-off from higher lying areas and therefore smaller volumes of water will reach the Mfolozi River. Pollution emanating from the mining areas could severely influence catchment areas that feed into the St Lucia wetland system.”

Some of the soils in the mining area are also highly susceptible to erosion and there is a likelihood of gulley erosion that would carry more silt into the Mfolozi River and its tributaries.

See the infographic  at http://iol.io/b96rj

What the company is offering

Given the widespread social and environmental effects of the proposed coal mine, what is the mining company offering in return?

According to Jacana, the Ibutho project hoped to generate 200 permanent jobs, possibly increasing to about 400 ‘job opportunities’ after about five years.
‘Ibutho has set a target to ensure that at least half these opportunities are allocated to the local communities.’

As part of its social labour plan, Ibutho planned to offer adult basic education and training, core business training, artisan training, learnerships, bursaries and internships to the value of R6.6 million over the first five years.

This would include |22 bursaries in mechanical, electrical, human resources and geology, as well as |31 learning opportunities for machine operators, truck drivers, health, safety and human resources staff, mechanics, electricians, or fitters and turners.

Ibutho would also support education and small business projects worth R2m in the first five years and hoped to provide communities with local procurement and SMME business opportunities and possible equity participation.

Ibutho described its Fuleni coal mining project as a |44.9% black economic empowerment shareholding, of which at least 5% free carry share equity was offered to a community shareholding trust.

It said most of Ibutho’s directors and shareholders were black entrepreneurs. The report did not name them all, but appendices in the report listed some of them as Thomas Ignatius Borman, Johan van den Berg, Locksley Pege, Menzi Gqwetha and Thembi Myeni.

The names of the directors and shareholders of Ibutho’s holding company were not listed, although Wasat Investments and Chlorosys Investments jointly hold a 58.95% shareholding in Ibutho Coal.

Also buried among the annexures are the minutes of a ‘volatile and emotional’ community meeting between Ibutho, consultants and local people at Siyokomane Primary School on September 21. The minutes showed the meeting was held in a ‘clearly hostile atmosphere’.
The Ibutho presentation could not take place.